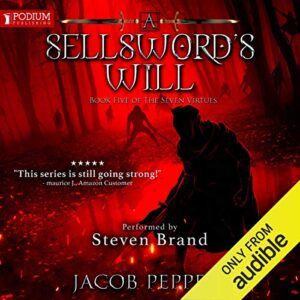 To battle the creatures of darkness, one must first leave the light behind.

Aaron and his companions return from Baresh with the truth of what the alliance faces, yet such knowledge is little comfort. Throughout the city, men and women whisper of demons, of monsters. But though they might disagree on the nature of Kevlane’s twisted creations, there is one thing they have in common. Fear.

For the creatures they face are not men – not any longer. They are death given form and function. They are, it seems in the darkest hours – and there are many such now – Telrear’s doom.

Crippled by indecision, the alliance leaders argue; they argue, they bicker, and they hesitate. A hesitation which, Aaron could tell them – if only they would listen – will kill them swifter than any blade or bow.

For shadows move in the night. Shadows which feel no pain or mercy, that have long since forgotten the meaning of compassion. But there are other threats in the darkness, other mysteries, and in poorly-lit taverns, men and women huddle together and whisper. If one listens closely enough, he will hear a name, one spoken in hushed, fearful tones. He will hear Akalians.

Little is known about the followers of the Shadow God, only that where the Akalians walk, death follows.

Meanwhile, confident of victory, Kevlane bends his dark desire to creating even more terrible horrors. Yet there is one thing he has not accounted for, one which the coming days and weeks will teach him – the strength of a sellsword’s will.