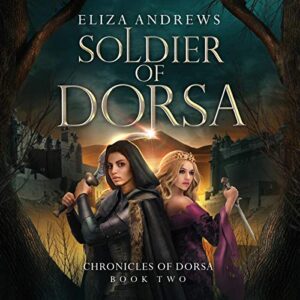 A war is brewing in the Empire.

Not the War in the East – that is a war everyone already knows about, the war that some wanted to end so badly that they murdered an Emperor to stop it. No, this is a different war. A war between the Shadowlands and the mortal world, a war between light and darkness. A war the Brotherhood of Culo has warned about for generations. But no one wanted to listen.

And as war brews, an Empress in exile struggles to regain her crown, and the warrior sworn to protect that Empress fights to make it back to her. Yet the warrior faces an enemy which even she, the Empire’s greatest living sword master, may not be able to defeat: The warrior battles time itself.

And time is running out for the soldiers of the House of Dorsa.

The shadows are coming. Can you hear them?

This is book two in a series of three. Listen to Princess of Dorsa first!