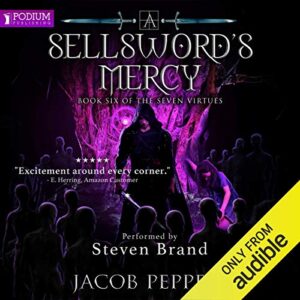 When darkness comes, there is no knowing who will carry the light and stand against it.

Aaron and his companions have been saved from Kevlane’s creatures only to find themselves in the power of the Akalians, a shadowy group of warriors many believe aren’t men at all, but creatures of nightmare bent on blood and death.

But not all the shadows’ secrets are evil ones, and allies are often found in the unlikeliest of places.

In Baresh, the tournament has begun, and the ancient mage, Kevlane, adds more twisted creatures to his army, fashioning a force the likes of which the world has never seen.

Meanwhile, Grinners sows seeds of distrust in Perennia, turning the city against its would-be saviors, against itself. As suspicion spreads, neighbor turns against neighbor, friend against friend. Blades are drawn in dark alleyways and well-lit taverns alike, and the world’s last bastion of hope totters on the brink of destruction, a knife held at its own throat.

If Perennia is to be saved from the approaching threat, then its salvation will come not from great kings or queens, but at the hands of ordinary men and women, many whose hands are long-stained with the blood of innocents.