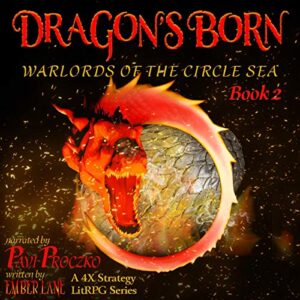 Portsmouth is being invaded.

The Soul Gate has risen from the bowels of the underworld.

Welcome to Dragon’s Born, the next thrilling installment in the Warlords of the Circle Sea 4X LitRPG series. In Dragon’s Mist, Connor and his knights explored the Land of Devon. They fought great beasts, took on epic quests, and finally built Dragon’s Mist, a city on the edge of a great falls that cuts the land in half.

You’ve played the games, now listen to the audiobook!

With Upper Devon secured, Gorunt ElfKiller vanquished, Ipsala annexed, it is time for Connor to expand. Will he get to Portsmouth in time to save it? What lies in wait beyond the Soul Gate? Are the rumors coming out of Dracolar true? What of his dragon egg?

The gloves are off! Now Connor must wage war on more than one front and build a civilization capable of winning.

Because there is no other option.

This is a LitRPG – Civ building fantasy tale and includes progression and settlement stats.

For lovers of 4X Strategy MMORPG civilization building games who enjoy a tale woven in the lands they spend far too much time in.