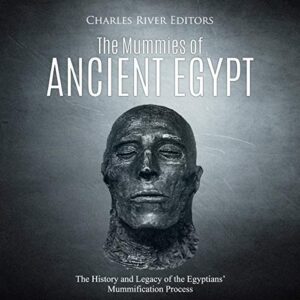 Africa may have given rise to the first human beings, and Egypt probably gave rise to the first great civilizations, which continue to fascinate modern societies across the globe nearly 5,000 years later. From the Library and Lighthouse of Alexandria to the Great Pyramid at Giza, the ancient Egyptians produced several wonders of the world, revolutionized architecture and construction, created some of the world’s first systems of mathematics and medicine, and established language and art that spread across the known world. With world-famous leaders like King Tut and Cleopatra, it’s no wonder that today’s world has so many Egyptologists.

Given the abundance of funerary artifacts that have been found within the sands of Egypt, it sometimes seems as though the Egyptians were more concerned with the matters of the afterlife than they were with matters of the life they experienced from day to day. This is underscored most prominently by the pyramids, which have captured the world’s imagination for centuries. The pyramids of Egypt are such recognizable symbols of antiquity that for millennia, people have made assumptions about what they are and why they exist, without full consideration of the various meanings these ancient symbolic structures have had over the centuries. Generations have viewed them as symbols of a lost past, which in turn is often portrayed as a world full of romance and mystery. This verbal meaning has become associated with the structures through the tourism industry, where intrigue obviously boosts ticket sales. In fact, the Egyptian pyramids are so old that they were also drawing tourists even in ancient times. In antiquity, the Great Pyramid of Giza was listed as one of Seven Ancient Wonders of the World, and it is the only one still surviving today.

Today, Egyptian practices for death and the afterlife are intimately associated with mummies, which have both fascinated and terrified people for centuries. In countless movies, these preserved dead bodies from ancient times are often shown to be mystical creatures that come back from the dead to exact revenge. In the same vein, over the centuries, Egyptian society suggested that there was a tomb curse or “curse of the pharaohs” that ensured anyone who disturbed their tombs, including thieves and archaeologists, would suffer bad luck or even death. Naturally, there were warnings inscribed on the tombs of many buried Egyptians, typically made in an effort to deter grave robbers. One inscription dating back to the 3rd millennium BCE tomb of Khentika Ikhekhi reads, “As for all men who shall enter this my tomb…impure…there will be judgment…an end shall be made for him…I shall seize his neck like a bird…I shall cast the fear of myself into him”.

In reality, Egyptian mummies have been preserved throughout time due to the meticulous process that created them, and while Egyptian mummies are the most famous, there are preserved bodies from all around the world from across history. Some of these mummies were accidents of nature, while others were more intentional, preserved through human intervention. In Egypt, the first mummies seem to have been natural, but after their discovery, mummification became a time-honored tradition in this ancient civilization.

The Lair of Anubis

A History of Egypt