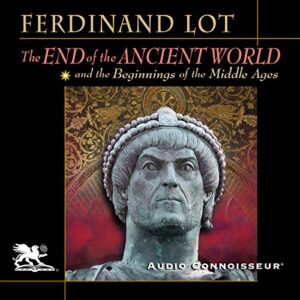 Ferdinand Lot (1866-1952) was one of the great historians of his generation, and the transition from Roman to Medieval civilization was a process that fascinated him most of his life. Rather than placing the emphasis for Rome’s fall on purely political or military reasons, Lot put forth multiple explanations for the birth of the Middle Ages which embrace not only politics and war, but linguistic, geographic, cultural, social, and economic factors. Today we take these reasons for granted, not realizing this line of reasoning was established by Lot.

According to Lot, the Roman Empire became an enormous trade sphere with its population clustered close to the sprawling shores of the Mediterranean. It’s decline was a result of economic retrogression in the west as the wealth was gradually transferred to the workshops, merchants, and granaries of the east which supplied the west with its food and luxury goods. Meanwhile, as the military and welfare needs in the west continued to rise, impoverishment of the ever decreasing tax base set in. In its desperate attempt to hold things together, the Roman government became ever more grasping, even as the bulk of the population is reduced to serfdom. By the time the frontiers are being overrun, there has taken place a psychological change in men’s minds. The barbarian invasions merely transfer ownership of the wretched system.