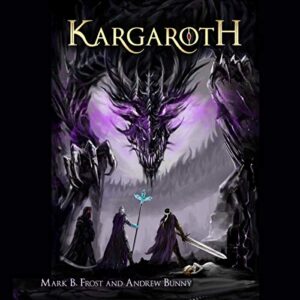 Centuries have passed since Elzaniru stripped the gods of their powers and sealed them away, ending forever the war of Light and Dark. In the absence of their divine wills, mankind has thrived. Great military nations have arisen and technology has advanced, the new gods of the land. But when one man unearths Kargaroth, the Unholy Blade, the spectre of the old gods will rise once more as Elzaniru’s children battle for the future of Morolia.

When rumors fly of a demon terrorizing the forest surrounding the nation of Felthespar, Atheme Tethen is called upon for help. But instead of a demon, he discovers only a wanderer using battles to find his place in the world. Atheme finds sympathy for the young warrior and gives him a home, and soon finds Abaddon Daemon his closest friend.

When he begins to suspect that Abaddon’s strength is unnatural, he discovers that his new friend is actually a powerful mystic. Using this to his advantage, Atheme calls upon the powers of the mystic to aid Felthespar in its wars. Abaddon’s successes mount rapidly and his name becomes legend, and soon he is turned to face the rival nation of Revian. But as the war there worsens, Abaddon turns to darker powers for aid. He draws upon Kargaroth, an unholy power forged by the lost civilization of the Cainites.

Soon Kargaroth seizes control of Abaddon, and Atheme finds himself pitted against a human weapon of his own creation. As Abaddon ascends into a new dark god, Atheme is forced to make the decision between saving his best friend, or killing him for the safety of his people – and possibly his world.

The Devil and the Dark Water