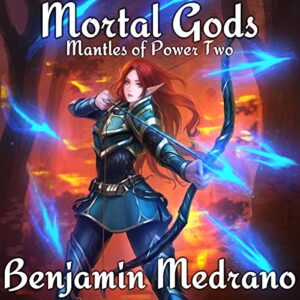 Torn from her friends, Kitania is captured by a goddess. She can only hope that her friends have survived.

Torn from the sides of her friends by angelic magic, Kitania finds herself in the mortal world once more, among those who suspect she’s a demon assassin or spy. Though most of those suspicions quickly subside, she finds herself drawn into the elven court’s intrigue and is powerless to act against those who sent her there.

Meanwhile, Isalla and Rose are waiting for word of their lost friend, even as they begin gathering more hints of what those who betrayed them are scheming. Yet, as the two groups come closer to reuniting, the plots of their enemies are progressing, and despite their experiences they’ve underestimated the lengths to which the conspiracy will go for victory.

Paul Takes the Form of a Mortal Girl

One thought on “Mortal Gods”