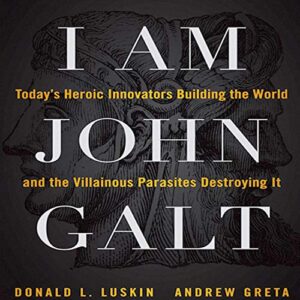 Inspired by Ayn Rand’s characters in Atlas Shrugged and The Fountainhead, penetrating profiles of both the innovators who move our world forward and those who seek to destroy the achievement of others….

John Galt, the fictional character from Ayn Rand’s best-selling novel Atlas Shrugged has come to embody the individualist capitalist who acts in his own enlightened self interest, and in doing so lifts the world around him. Some of today’s most successful CEOs, journalists, sports figures, actors, and thinkers have led their lives according to Galt’s (i.e., Rand’s) philosophy.

Now, in I Am John Galt, these inspiring stories are gathered with the keen insight and analysis of well-known market commentator Donald Luskin and business writer Andrew Greta. Filled with exclusive interviews, profiles, and analyses of leading financial, business, and artistic stars who have based their lives, and careers, on the philosophy of the perennially popular Ayn Rand, this audiobook both inspires and enlightens. On the other side are Rand’s arch villains – the power-seekers, parasites, and lunatics who would destroy that which the creators and builders make. Who are today’s anti-heroes, fighting the creativity of the innovators?

Engaging and entertaining, I Am John Galt examines how the inspiration that is Galt thrives more than 50 years after publication of Atlas Shrugged. It will spark the interest of Ayn Rand fans everywhere, as well as those seeking a way to succeed in today’s turbulent and confusing times.

Atlas of the Seven Continents