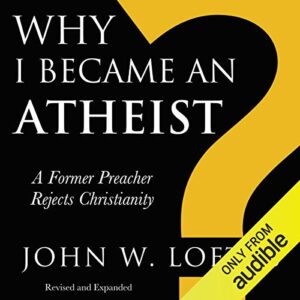 For about two decades, John W. Loftus was a devout evangelical Christian, an ordained minister of the Church of Christ, and an ardent apologist for Christianity. With three degrees – in philosophy, theology, and philosophy of religion – he was adept at using rational argumentation to defend the faith. But over the years, doubts about the credibility of key Christian tenets began to creep into his thinking. By the late 1990s, he experienced a full-blown crisis of faith.

In this honest appraisal of his journey from believer to atheist, the author carefully explains the experiences and the reasoning process that led him to reject religious belief. The original edition of this book was published in 2006 and reissued in 2008. Since that time, Loftus has received a good deal of critical feedback from Christians and skeptics alike. In this revised and expanded edition, the author addresses criticisms of the original, adds new argumentation and references, and refines his presentation. For every issue, he succinctly summarizes the various points of view and provides references for further analyzation. In conclusion, he describes the implications of life without belief in God – some liberating, some sobering.

This frank critique of Christian belief from a former insider will interest freethinkers as well as anyone with doubts about the claims of religion.

The Triumph of Christianity

The Ultimate Star Wars and Philosophy