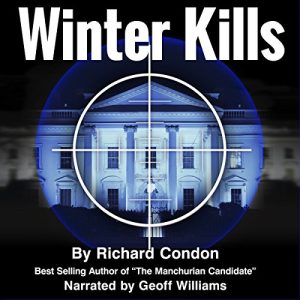 President Timothy Kegan is assassinated while riding in a motorcade in Philadelphia; a single shooter is caught and convicted. Fourteen years later, the slain President’s half-brother, Nick, hears a deathbed confession that upends everything he thought he knew about his brother’s death. In a desperate rush to find the real killer, Nick must navigate the murky waters of a conspiracy that involves the CIA, oil barons, the police force, movie stars, and people at the highest level of government.A gripping political thriller, this book contains disturbing echoes of the Kennedy Assassination. Rife with political intrigue, it addresses many mysteries that remain unsolved in the real life JFK case—and it’s sure to keep you listeningABOUT THE AUTHOR Richard Condon (1915-1996) wrote over 26 satirical thrillers throughout a prolific career, dealing with themes of political corruption, greed, and abuse of power. Before his career as a novelist, Condon served in the US Merchant Marines and later became a Hollywood publicist, agent, and advertising writer. In addition to Winter Kills, Condon’s best-selling works include The Manchurian Candidate and the Prizzi series, dealing with the life of a crime family in New York. Winter Kills was made into a movie in 1979 staring Jeff Bridges, John Huston, Elizabeth Taylor, and Anthony Perkins.

The Sea in Winter