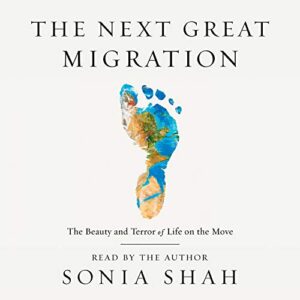 A prize-winning journalist upends our centuries-long assumptions about migration through science, history, and reporting – predicting its lifesaving power in the face of climate change.

The news today is full of stories of dislocated people on the move. Wild species, too, are escaping warming seas and desiccated lands, creeping, swimming, and flying in a mass exodus from their past habitats. News media presents this scrambling of the planet’s migration patterns as unprecedented, provoking fears of the spread of disease and conflict and waves of anxiety across the Western world. On both sides of the Atlantic, experts issue alarmed predictions of millions of invading aliens, unstoppable as an advancing tsunami, and countries respond by electing anti-immigration leaders who slam closed borders that were historically porous.

But the science and history of migration in animals, plants, and humans tell a different story. Far from being a disruptive behavior to be quelled at any cost, migration is an ancient and lifesaving response to environmental change, a biological imperative as necessary as breathing. Climate changes triggered the first human migrations out of Africa. Falling sea levels allowed our passage across the Bering Sea. Unhampered by barbed wire, migration allowed our ancestors to people the planet, catapulting us into the highest reaches of the Himalayan mountains and the most remote islands of the Pacific, creating and disseminating the biological, cultural, and social diversity that ecosystems and societies depend upon. In other words, migration is not the crisis – it is the solution.

Conclusively tracking the history of misinformation from the 18th century through today’s anti-immigration policies, The Next Great Migration makes the case for a future in which migration is not a source of fear, but of hope.