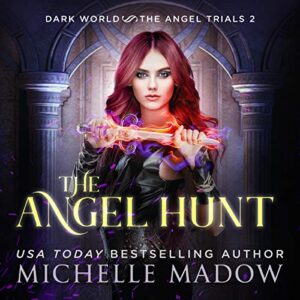 The hunt for demons is about to heat up.

Somehow, Raven has convinced Noah and Sage – the two wolf shifters who saved her from a demon attack – to let her tag along on their quest to kill 10 demons. The payoff for completing the mission? Entrance to the mystical island of Avalon, where Raven will go through trials to gain the strength she needs to save her mom’s life.

Raven wants to help the shifters on their quest. But Noah refuses to put her in any danger – which makes no sense, since he hates her. At least she thinks he hates her…until he catches her off guard and kisses her. Suddenly, they’re connected in ways she doesn’t understand, and she feels closer to him than ever.

If she didn’t know any better, she’d think they imprinted on each other. But that’s impossible. Because shifters can’t imprint on humans.

And if they did imprint on each other, then the supernatural world is changing – and Raven’s right in the center of it.

Emotions will flare between Raven and Noah in the second audiobook in the Angel Trials series, an urban fantasy adventure with romance, magic, and twists that will keep you listening long into the night!