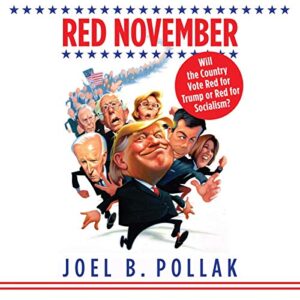 A conservative journalist hits the campaign trail to cover the 2020 Democratic presidential primary from the inside.

The 2020 Democratic primary produced the most left-wing field of candidates in the history of the United States. For more than a year, the presidential hopefuls ran on “democratic socialism” – until a dramatic turn of events changed the primary, and the country.

In RED NOVEMBER, Breitbart News senior editor-at-large Joel Pollak tells the first-hand story of how the Democratic Party became so extreme, and provides a riveting account of life on the campaign trail. There are confrontations with candidates, scuffles in the spin room, and the growing tension as a killer virus stalks the nation.

Part travelogue, part memoir, part analysis, Red November is a humorous, yet clear-eyed, look behind the scenes at the candidates, activists, and voters as Democrats choose who will take on the sacred task of challenging Donald Trump – “45,” as he is known to his haters – and ushering in a utopian age of “Medicare for All” and the “Green New Deal.”

The Hunting of Hillary