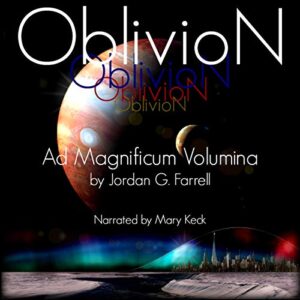 Writing inspired by the great sci-fi writers of old, like Heinlein, Clarke, and Asimov, Oblivion: Ad Magnificum Volumina promises to bend and twist the listener’s mind in scientifically based ways that refreshingly takes you through serious leaps far beyond today’s “boy-racer” comic book science-fiction.

It is a story that begins a human journey of self-actualization, transformation, and enlightenment, millennia in the future after nearly going extinct, which leaves humanity struggling to survive in colonies across the solar system.

In Garbriellium, the largest and most prolific of those colonies on Europa, Jupiter’s ice-covered moon, Justin and Jessica Forsythe embark on related but separate quests to answer what life exists beneath the ice, how humans and AIs interrelate with one another, and set out to solve mysteries surrounding the spontaneous natural birth of the first human being in nearly 2,000 years.

Replete with deep sociological, biological, spiritual ethos about what it means to be alive, Justin and Jessica, the strong and fully-developed couple, discover how voluminous, multi-dimensional time blurs the boundaries between living now and what lies in the magnificent beyond.