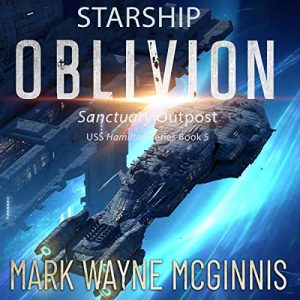 The situation is dire. The Alliance is crumbling. Thine, Pleidian, and Human civilizations are each at a crossroads for their very survival. Captain Galvin Quintos has a plan to defeat the Grish and the far more dangerous Varapin. But to pull this off, he’ll have to go it alone, cut ties with the US Space-Navy, and become a true outlaw – a full-fledged pirate. That and say goodbye to his loyal friend Derrota, Admiral Block, and Captain Gail Pristy.

Feeling he may have just jumped from the frying pan into the fire, Quintos is forced to build new strategic alliances with the Pylors. But to have their help and access to their ragtag fleet of warships, he’ll need to prove himself. He’ll need to embrace ruthless marauding to acquire a priceless gem onboard the luxury starliner Pecunious. Looming, though, is an epic battle with the Varapin elite Vanquishing Shadow Strike Force – a battle that could very well dictate who will emerge victorious in this war.

Yes, Gavin will no longer have US Space-Navy assets at his back, but he will have Hardy, the Symbios, and one eight-mile-long Gorvian technology warship called Oblivion.

USS Jefferson: Charge of the Symbios