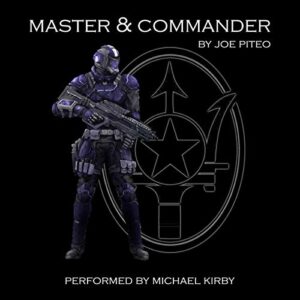 Master and Commander follows the action, the warriors, and the warships of the Moon in 2142. As the Earth is being devastated by a viral pandemic, the Moon has become a sanctuary for humanity. The plague is only one of the many enemies. However, the new Lunar nation states have chosen sides to continue the ancient battle between Western and Islamic culture. While fighting for survival, great lunar warships rage against each other individual battles and sweeping fleet actions reminiscent of Horatio Nelson of the late 18th century.

The book follows Jack Aston and his ship, Sofia, in their first sea trial, a test for the ship as well as the new commander and her crew. Jack discovers the isolation of command, the burden of responsibility, and the complexities of leadership. Jack meets Steven Montrossa during his time in port in the great domed city of Port Plato, the first metropolis to be terraformed and sealed from the lunar vacuum. Jack and Steven do not start as immediate friends. The personalities of an archetypal naval commander and a gifted iconoclastic scientist struggle to find complimentary elements. During their stay in Port Plato, they begin to find the connections that will eventually grow into mutual respect and an enduring friendship.

Maria Domingo joins the Sofia as her First Officer. Domingo is an excellent officer with a stellar record, but promotion to commander has alluded her. She will be a fine addition to Ashton’s staff aboard the Sofia. She feels she is Jack’s equal, however, and this attitude strains their relationship but eventually evolves into an impressive military partnership.

Montrosa and Domingo’s romance as teenagers on Earth remains vague and somewhat mysterious. It remains as romantic tension throughout the book. Steven seems to want to rekindle the relationship while Maria stays distant within the protection of her rank and naval protocol.

Master of None: All Trades