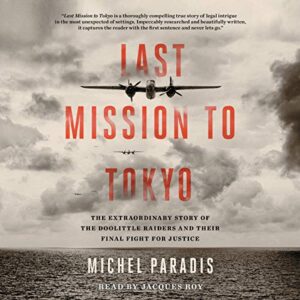 A thrilling narrative that reveals a key but untold story from World War II: The Doolittle Raids and the international war crimes trial that changed history.

In 1942, freshly humiliated from the attack on Pearl Harbor, President Roosevelt demanded a show of strength against the Japanese. Jimmy Doolittle, a stunt pilot with a doctorate from MIT, came forward and led eighty young men on a seemingly impossible mission across the Pacific. Dubbed “The Doolittle Raiders,” they struck the mainland of Japan and permanently turned the tide of the war in the Pacific. But their legendary mission was only the beginning of the story…

In his debut history, legal scholar and historian Michel Paradis uncovers one of the last untold stories of a seminal moment in World War II. With incredible and gripping detail, set amidst the intrigue of wartime Shanghai, Last Mission to Tokyo recounts the dramatic aftermath of the Doolittle mission, which involved two lost crews captured, tried, and tortured at the hands of the Japanese; the dramatic rescue the survivors in the last weeks of the war; the international manhunt that followed; and the war crimes trial in which two dynamic young lawyers – Major Robert Dwyer, a prosecutor determined to bring justice to the Raiders, and Lieutenant Colonel Edmund Bodine, a decorated pilot reluctantly assigned to defend the Japanese – faced off over what constitutes a fair trial, when we should show mercy to our enemies, and right and wrong in the fog of war.

The result is a heart-stopping, perspective-shifting courtroom drama that opens our eyes to a final act in the story of the Greatest Generation. Like compelling World War II histories such as Lucky 666, Unbroken, and Nuremberg: Infamy on Trial, Last Mission to Tokyo is a thrilling war story meets courtroom drama that also offers a deep dive into the Japanese perspective that fans of Clint Eastwood’s Letters from Iwo Jima and John Dower’s Embracing Defeat  will find fascinating.

Summer for the Gods

The Trial of Lizzie Borden