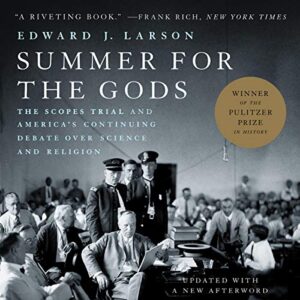 The Pulitzer Prize-winning history of the Scopes “Monkey” Trial and the battle over evolution and creationism in America’s schools, now updated with a new afterword.

In the summer of 1925, the sleepy hamlet of Dayton, Tennessee, became the setting for one of the 20th century’s most contentious courtroom dramas, pitting William Jennings Bryan and the anti-Darwinists against a teacher named John Scopes, represented by Clarence Darrow and the ACLU, in a famous debate over science, religion, and their place in public education. That trial marked the start of a battle that continues to this day – in cities and states throughout the country.

Edward Larson’s classic Summer for the Gods – winner of the Pulitzer Prize in History – is the single most authoritative account of this pivotal event. The “Monkey Trial”, as it was playfully nicknamed, was instigated by the American Civil Liberties Union to challenge a controversial Tennessee law banning the teaching of human evolution in public schools. The Tennessee statute represented the first major victory for an intense national campaign against Darwinism, launched in the 1920s by Protestant fundamentalists and led by the famed politician and orator William Jennings Bryan.

At the behest of the ACLU, a teacher named John Scopes agreed to challenge the statute, and what resulted was a trial of mythic proportions. Bryan joined the prosecutors, and acclaimed Criminal Attorney Clarence Darrow led the defense – a dramatic legal matchup that spurred enormous media attention and later inspired the classic play Inherit the Wind.

Now with a new epilogue assessing the resonance of this history in America today, Summer for the Gods is the authoritative examination of the Scopes trial and its religious, cultural, educational, and political legacies.

The Summer We Ran Away