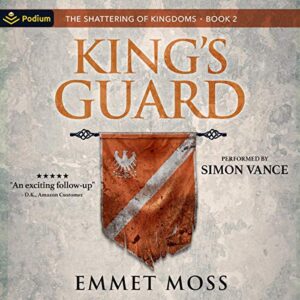 The Mercenary Code has been broken, and a new Protectorate Empire has arisen.

In league with renegade mages known as the Fallen, the Protectorate will stop at nothing to expand its reach and unify the factions of Old Caledun by any means necessary. The few who escaped the coup are now in a tenuous struggle against the growing influence of this corrupt new Order.

Mercenary companies loyal to the old ways race to defend one of the last bastions of freedom in the South. In the capable hands of its ardent commander, one city prepares for the decisive battle that will shape the future of Kal Maran. New allies have joined the cause, but can they turn the tide?

In the depths of an ancient subterranean library, two unlikely companions continue to explore the mysteries of a long-vanished race. While in the distant Drayen Lands, a foreign noblewoman is thrust to the fore in the midst of an enemy invasion by sea.

And in the North, hope has been rekindled. Surviving the trials of the Wilds and reaching the lands of the Iron Shield, the An’Dari – legendary protector of Kings – has returned. Searching for Caledun’s true heir, his memories hold the key to absolving the sins of the past.