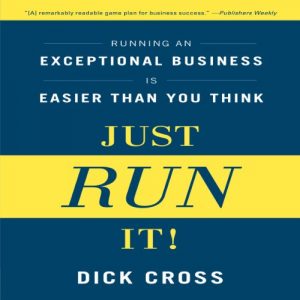 The growth engine of the global economy is no longer through mega-production and huge conglomerates, but rather through the proliferation of smaller enterprises. In America alone, tens of thousands of businesses crop up each year. Unfortunately, few will succeed, though not due to a lack of ingenuity, initiative, or even capital. Why, then? Because, according to Dick Cross, author of Just Run It!, most business owners lack not just the fundamentals, the nuts and bolts of operating a business effectively day to day, but the bigger picture of how to achieve business success. After taking dozens of companies from underperforming to high performing, Cross observed a pattern, out of which he devised a formula for success. Using his Just Run It! formula he is now teaching business owners how to understand their business on “the back of an envelope” and make it exceptional.

No B.S. Business Success in the New Economy

The 15 Essential Marketing Masterclasses for Your Small Business

The Biker’s Guide to Business