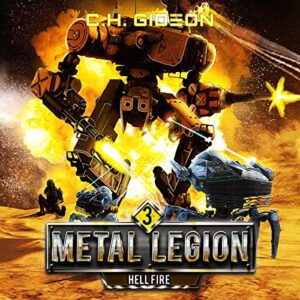 The Brick. An inhospitable planet in Finjou space. Humans settled there anyway. Now the aliens want them gone.

Captain Xi Bao. Your orders are to conduct Operation Red Rock. Evacuate the human colonists from the Brick before the Finjou find them. Collect material evidence of the Jemmin conspiracy buried more than 30 kilometers below the surface. Easy mission.

But the colonists don’t want to leave. And the Finjou don’t want the humans boring a hole in their dead planet. And everyone has nukes.

Metal Legion gets thrown into the middle of an intergalactic cesspool. Make the humans evacuate. Peacefully. Using the awe-inspiring firepower of the mechs. Make peace with the aliens, even if you have to fight them.

The Finjou aren’t amused. Predators who believe in dominance.