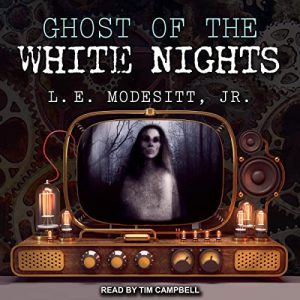 Professor Johan Eschbach’s lovely wife, Llysette du Boise, a refugee from the burning remains of France and a world-famous vocalist, has been invited to provide a command performance for the Russian Imperial household.

Johan accompanies her, allowing him to work on the oil concession in Russian Alaska that Columbia so desperately needs and do some spying on the side. Johan’s espionage is carried out against the backdrop of the famous white nights of St. Petersburg, the nearly Arctic midsummer when the sun barely dips below the horizon and the sky seems to dissolve in ivory light. But even the oil shortage will fade to insignificance when Johan discovers what new weapons technology the Russians are developing, a threat even more fearsome than the atomic bombs of Austro-Hungary.