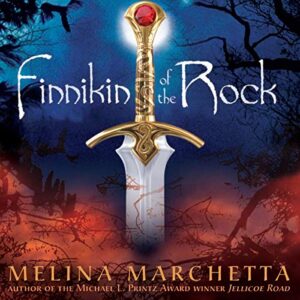 At the age of nine, Finnikin is warned by the gods that he must sacriﬁce a pound of ﬂesh to save his kingdom. He stands on the rock of the three wonders with his friend Prince Balthazar and Balthazar’s cousin, Lucian, and together they mix their blood to safeguard Lumatere.

But all safety is shattered during the ﬁve days of the unspeakable, when the king and queen and their children are brutally murdered in the palace. An impostor seizes the throne, a curse binds all who remain inside Lumatere’s walls, and those who escape are left to roam the land as exiles, dying by the thousands in fever camps.

Ten years later, Finnikin is summoned to another rock - to meet Evanjalin, a young novice with a startling claim: Balthazar, heir to the throne of Lumatere, is alive. This arrogant young woman claims she’ll lead Finnikin and his mentor, Sir Topher, to the prince. Instead, her leadership points them perilously toward home. Does Finnikin dare believe that Lumatere might one day rise united? Evanjalin is not what she seems, and the startling truth will test Finnikin’s faith not only in her but in all he knows to be true about himself and his destiny.

In a bold departure from her acclaimed contemporary novels, Printz Medalist Melina Marchetta has crafted an epic fantasy of ancient magic, feudal intrigue, romance, and bloodshed that will rivet you from the ﬁrst words.