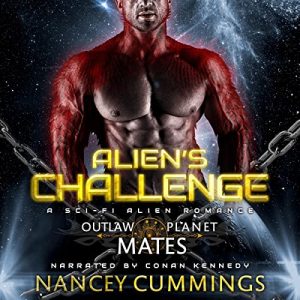 Stop me if you’ve heard this story before. One minute Alice was camping, trying to connect with nature, then there’s this blinding white light. Gravity must have quit because Alice and her sleeping bag were floating off the ground.

She wakes up on an alien planet full of, you know, aliens. Outlaws. Rules are optional and people are property. So not cool. Then there’s a train robbery and she’s getting abducted. Again.

But this guy? He’s a giant lizard man, just a solid wall of muscle, scales, and bad attitude. He’s dangerous and he’s gone into a mating fever, which he says is her fault.

So what is she going to do about it?

Better question, what is tall, dark, and grumpy going to do about it?

Two decades ago, Faris was exiled to this prison planet. Only the strong survive here.

He’s too old for a mating fever, but his body has other ideas. The human female is meant for his boss, but there’s a change of plan. She is his and he does not share.

Alien’s Challenge is a stand-alone book in the Outlaw Planet Mates series. The books can be listened to in any order. No cliff-hangers, no cheating, and a HEA.