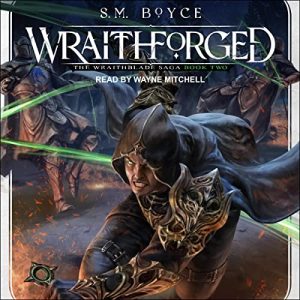 Outlaw. Assassin. Aspiring warlord. Connor Magnuson’s been called many names, but which of them are true?

Through his connection to the Wraith King, Connor has access to far more power than he realizes. His shadow blades give him the strength of a god, granting him the limitless potential of a man with no equal.

But no matter what good Connor does, the people still fear him. Even those he saves run screaming in his overwhelming presence. He wields the sort of power people unite to destroy, and word of his growing abilities spreads fast. In the north, Teagan Starling rallies the most fearsome army in Saldia, hoping to destroy the new Wraithblade before the man can master his gifts. Despite Connor’s noble deeds, despite all the good he has done, the world fears him. They always will. To protect his home, his friends, and his family, he must embrace the Wraith King’s bloodstained legacy and truly become power incarnate.

Hell itself is on the warpath. When it reaches Connor, he will do what he has always done—look death in the eye and draw his swords to face it.