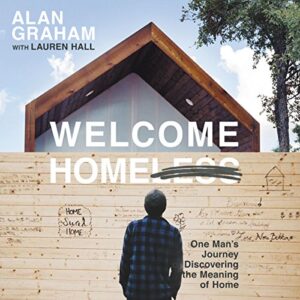 No other word better describes our modern-day suffering. It reveals one of our deepest and most painful conditions – not having a sense of belonging. However, Alan Graham, founder of Mobile Loaves & Fishes and Community First! Village, is improving the quality of life for a large quantity of people through sharing his personal story of becoming more human through humanizing others. Graham believes the more we can give people dignity, the power of choice, and genuine community, the better we’ll be able to offer solutions that will have impact on the world at large. And while his missionary work is focused on giving a home to the physically homeless, he also wants to transform the lives of every living person by shifting the paradigm in understanding what it means to be “home”.

In Welcome Homeless, Graham delves deep into what it means to be connected to God, the earth, and each other. In doing so, he shows us the home we’ve all longed for but never had. Welcome Homeless is about becoming fully human by being fully present. It is about finally connecting with the disconnected and finding our identity through knowing the true identities of others. Graham wants to engrain the human story in you so deeply that you start being who you were made to be – that you start finally being like the image from which you were made and start empathizing instead of sympathizing with the people around you. Similar to how we can become 100 percent fully human by mimicking the ultimate image, we can shape a better world by mimicking the picture of the new heaven and the new earth – a picture that has reality at the heart of it but is beyond our imagination.

Alan Graham also shares his personal story, the stories of the homeless, and the stories of those whose worldviews have been shifted by the homeless. Because of his raw, humorous, and honest voice, he achieves a rare and profound universality. Houses become homes once they embody the stories of the people who have made these spaces into places of significance, meaning, and memory. Home is fundamentally a place of connection and of relationships that are life-giving and foundational. Graham invites you to make everyone feel truly at home by finally inviting those living on the fringes of society into your heart.

This is why Welcome Homeless is about doing, not saying. It is about taking the ultimate and forward-thinking vision of a new heaven and new earth and literally breaking the soil so that new earth can exist here today. It is about realizing that homelessness is not fundamentally a consequence of moral and spiritual inadequacies; rather, it is often the logical and economical outcome for a large part of our population.