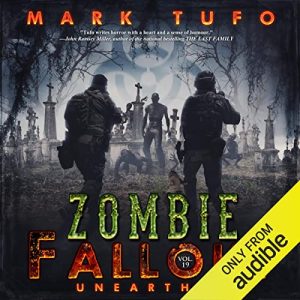 Nigeria. The densely packed cities are abandoned and in ruins. Isolated villages survive behind locked doors under constant threat of a war on two fronts; a war the living cannot win.

Hidden miles into the desert is a secret weapon that, if unleashed, will bring peace—but at the risk of total annihilation. Undermanned and with scant resources, Michael Talbot’s squad of misfits is ordered to retrieve classified data of the utmost imperative.

In a concealed laboratory, buried deep underground, the squad discovers a monstrous super-race that will either be humanity’s greatest weapon or deliver a blood-soaked end to their existence.

The mission becomes perilous and terrifying; all may not survive.

Above ground, zombies have made startling progress, and the team faces a powerful necromancer who controls an army of the dead. There is a magic here, though, that Michael never dared hope for.

Meanwhile, aboard the floating city the USS Jimmy Carter, a malcontented faction is hatching plans of violence and insurrection. Even within Talbot’s own squad there are mutinous whispers. How many lines will be crossed? What is the price of loyalty and honor? Is it the cost of survival?

Join Michael Talbot, BT, and their daredevil team on a gripping adventure to restore the world to the living!