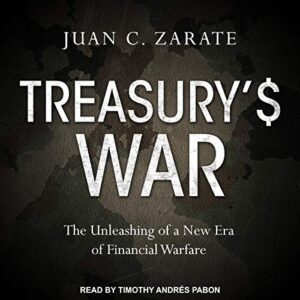 For more than a decade, America has been waging a new kind of war against the financial networks of rogue regimes, proliferators, terrorist groups, and criminal syndicates. Juan Zarate, a chief architect of modern financial warfare and a former senior Treasury and White House official, pulls back the curtain on this shadowy world. In this gripping story, he explains in unprecedented detail how a small, dedicated group of officials redefined the Treasury’s role and used its unique powers, relationships, and reputation to apply financial pressure against America’s enemies.

This group unleashed a new brand of financial power – one that leveraged the private sector and banks directly to isolate rogues from the international financial system. By harnessing the forces of globalization and the centrality of the American market and dollar, the Treasury developed a new way of undermining America’s foes. The Treasury and its tools soon became, and remain, critical in the most vital geopolitical challenges facing the United States, including terrorism, nuclear proliferation, and the regimes in Iran, North Korea, and Syria.

This is the unique story of the United States’ financial war campaigns and the contours and uses of financial power, and of the warfare to come.

The Treasury of David

The Age of Sacred Terror