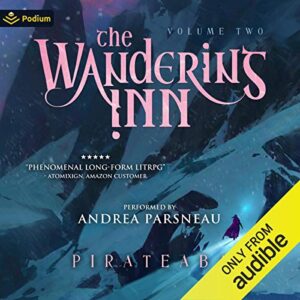 So reads the sign outside of the Wandering Inn, a small building run by a young woman named Erin Solstice. She serves pasta with sausage, blue fruit juice, and dead acid flies on request. And she comes from another world. Ours.

It’s a bad day when Erin finds herself transported to a fantastical world and nearly gets eaten by a Dragon. She doesn’t belong in a place where monster attacks are a fact of life and where humans are one species among many. But she must adapt to her new life – or die.

In a dangerous world where magic is real and people can level up and gain classes, Erin Solstice must battle somewhat evil Goblins, deadly Rock Crabs, and hungry [Necromancers]. She is no warrior, no mage. Erin Solstice runs an inn.