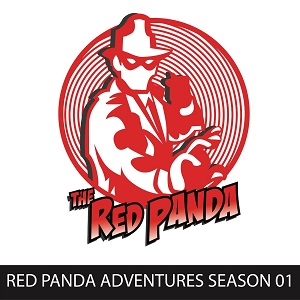 Thrill once again to all-new, full-cast audio adventure in the tradition of the golden age of radio with The Red Panda Adventures, Season One.

Hiding his true identity as one of the city’s wealthiest men behind a bright red domino mask, The Red Panda dispenses two-fisted pulp justice with strength, courage and eerie hypnotic powers.

Joined in his quest by that Famed Fighting Female The Flying Squirrel, this Terrific Twosome holds high the lamp of justice in a dark time! Superheroics in the classic radio tradition.

Contains 12 self-contained adventure programs, as featured on the award-winning Decoder Ring Theatre podcast. Stories include “The Riddle of the Sphinx”, “Night Patrol”, “Rabbit Season”, “The Golden Claw”, “The Devil’s Due”, “Death Danced at Midnight”, “Red Panda: Dead or Alive!”, “Curse of Beaton Hall”, “The Shadow Hunter”, “The Ghost Ship”, “Duality”, “The Deadliest Game”.