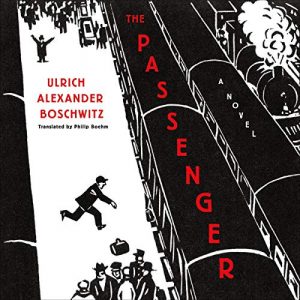 Hailed as a remarkable literary discovery, a lost novel of heart-stopping intensity and harrowing absurdity about flight and persecution in 1930s Germany

Berlin, November 1938. Jewish shops have been ransacked and looted, synagogues destroyed. As storm troopers pound on his door, Otto Silbermann, a respected businessman who fought for Germany in the Great War, is forced to sneak out the back of his own home. Turned away from establishments he had long patronized, and fearful of being exposed as a Jew despite his Aryan looks, he boards a train.

And then another. And another…until his flight becomes a frantic odyssey across Germany, as he searches first for information, then for help, and finally for escape. His travels bring him face-to-face with waiters and conductors, officials and fellow outcasts, seductive women and vicious thieves, a few of whom disapprove of the regime while the rest embrace it wholeheartedly.

Clinging to his existence as it was just days before, Silbermann refuses to believe what is happening even as he is beset by opportunists, betrayed by associates, and bereft of family, friends, and fortune. As his world collapses around him, he is forced to concede that his nightmare is all too real.

Twenty-three-year-old Ulrich Boschwitz wrote The Passenger at breakneck speed in 1938, fresh in the wake of the Kristallnacht pogroms, and his prose flies at the same pace. Taut, immediate, infused with acerbic Kafkaesque humor, The Passenger is an indelible portrait of a man and a society careening out of control.

A Change of Plans