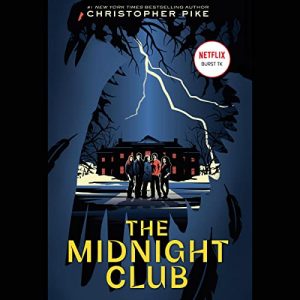 Soon to be an original Netflix series!

From the author of The Wicked Heart and The Immortal comes a beautiful and haunting novel about a group of five terminally ill teenagers whose midnight stories become their reality.

Rotterham Home was a hospice for young people—a place where teenagers with terminal illnesses went to die. Nobody who checked in ever checked out. It was a place of pain and sorrow, but also, remarkably, a place of humor and adventure.

Every night at twelve, a group of young guys and girls at the hospice came together to tell stories. They called themselves the Midnight Club, and their stories could be true or false, inspiring or depressing, or somewhere in-between.

One night, in the middle of a particularly scary story, the teenagers make a secret pact with each other, which says, “The first one who dies will do whatever he or she can do to contact us from beyond the grave, to give us proof that there is life after death.”

Then one of them does die…

The Club: Johnson, Boswell, and the Friends Who Shaped an Age