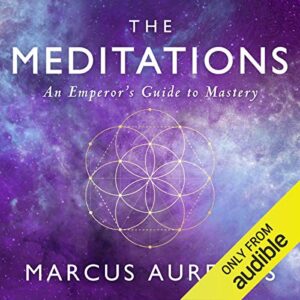 How to think clearly, act purposefully, overcome any obstacle, and find peace and happiness along the way.

Marcus Aurelius (121-180 CE) was one of the few true philosopher-kings in history.

His father died when Marcus was three. At age fifteen, he was adopted by Emperor Antoninus Pius, putting him in the line of succession; and at 40, Marcus became a reluctant emperor of the Roman Empire.

Marcus was reluctant because the demands of being emperor – on top of the temptations of wealth and power – seemed incompatible with his true ambition: to be a humble student of philosophy. Over time, though, Marcus worked out a practical philosophy that kept him grounded amidst the stresses and excesses of palace life. That’s why his philosophy is so relevant to us today, in the modern world.

The Meditations is a collection of Marcus’ personal journal entries. They were not intended for publication but to remind Marcus himself of his principles and priorities. As a result, they are intimate, direct, and extremely useful. This new edition is rendered in contemporary English, with a foreword by Sam Torode. A companion volume, The Manual: A Philosopher’s Guide to Life, is also available from Ancient Renewal.

The Mastery of Self