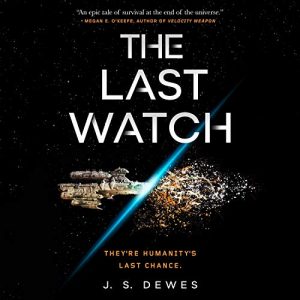 “Both readers are brilliant and nail the characterization in a way that instantly connects them to the listener. Everything here is top-notch.” (Booklist, starred review)

The Expanse meets Game of Thrones in J. S. Dewes’ fast-paced sci-fi adventure The Last Watch, where a handful of soldiers stand between humanity and annihilation.

It’s the edge of the universe.

Now it’s collapsing – and taking everyone and everything with it.

The only ones who can stop it are the Sentinels – the recruits, exiles, and court-martialed dregs of the military.

At the Divide, Adequin Rake commands the Argus. She has no resources, no comms – nothing, except for the soldiers that no one wanted. Her ace in the hole could be Cavalon Mercer – genius, asshole, and exiled prince who nuked his grandfather’s genetic facility for “reasons”.

Watch Out for Her