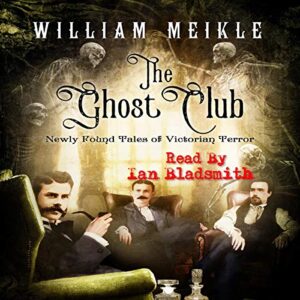 Writers never really die; their stories live on, to be found again, to be told again, to scare again.

In Victorian London, a select group of writers, led by Arthur Conan Doyle, Bram Stoker, and Henry James, held an informal dining club, the price of entry to which was the telling of a story by each invited guest.

These are their stories, containing tales of revenant loved ones, lost cities, weird science, spectral appearances, and mysteries in the fog of the old city, all told by some of the foremost writers of the day. In here you’ll find Verne and Wells, Tolstoy and Checkov, Stevenson and Oliphant, Kipling, Twain, Haggard, and Blavatsky alongside their hosts.

Come, join us for dinner and a story:

Interview with the author:

So, what makes this short story collection so special?

Meikle: I love the idea that all these famous writers knew each other, and met for a meal, a drink, a smoke and some storytelling in an old London club/bar setting. It chimes almost exactly with my own idea of a good time. It’s special to me in that it’s a culmination of the past half dozen or so years of writing. Before this collection there were the Carnacki stories, the Holmes stories, the Challenger stories, and the collaborations with M. Wayne Miller in numerous deluxe hardcovers. The Ghost Club feels like an endpiece to all of that, a last celebration of everything I love about the era and the storytellers. Plus it’s the most ambitious piece of work I’ve undertaken in my writing so far, the cause of much worrying and fretting on my part, so seeing the lovely blurbs and comments from writers I have long admired makes it extra special to me.

Why should horror fans give Victorian Terror a try?

Meikle: It’s where we come from. The Victorian era storytelling tradition was the launching point for horror, and also for crime fiction, for science fiction, for fantasy and for much of how we see the world today. It gave us Sherlock Holmes, Dr. Jekyll, Dracula, the Invisible Man, Captain Nemo, and all manner of ghosts, spooks and spectres that still fill our entertainment of choice today. It’s my way of paying homage to that tradition. This is who I am.

How did you choose which authors to use in this book?

Meikle: Initially all I knew was that Doyle and Stoker were founder members of the club in London. Then I found out that Henry James was in London at the same time as them and it started to come together. The cut off point is the early 1890s, which I picked to get the maximum number of writers available, and alive, and able to visit London, at the same time. Originally I wanted to get Dickens in there too, but he was too dead, although I did consider having his ghost tell a story at the Ghost Club but discarded it. I also had to do some sleight of hand to cram H. G. Wells in before he actually published anything. But I set myself the task of keeping the background bits as accurate as I could.