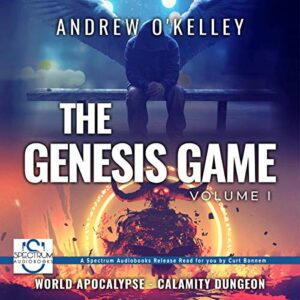 The Black Seraph rises with one mission.

Save humanity. From billions, only a million must survive.

The end of the era of humanity was marked by the appearance of the World Dungeon and the system of power it provided. No one gained more power than the tyrant known as the Black Seraph, the Angel of Genocide. Surviving at the expense of the rest of humanity, Seraph was able to complete the World Dungeon upon reaching the Altar of the End. A hollow victory, as he was cursed by the spirit of the dungeon for ruthlessly focusing on his empowerment.

His power sealed away within the dungeon, Seraph was cast into the past, reincarnated into the body of his child-liker self, forbidden from hoarding power for himself and charged with the mission of ensuring the survival of humanity. But people do not change overnight, and Seraph must find a new path forward and learn there’s more to power than being a tyrant if humanity is to survive the Genesis Game.

“With these rebirth stories, you get a character who uses foreknowledge to become super strong. This story acknowledges bad memory bad choices and simple disinterest. In other words, the character is a normal human being. Love it.”

“I hesitated a bit to pick this up after seeing negative reviews, but ignore them. Seraph is the ultimate anti-hero in the truest sense. He’s not evil so much as amoral from his experiences. I’m really interested in seeing how he develops going forward.”

“The MC was from my point of view believable. He does what needs to be done, I know many people might not agree but I found his choices realistic even though this is syfi/fantasy the choices felt realistic of a grown male. No crying and wishy-washy mistakes that gets everyone killed, you know letting the same shithead go 4000 time’s under the mistaken belief that the bad guy’s life is as important as the 30 people he killed and it would be wrong to take his life, then at the end he kills 40 more people. I REALLY HATE THAT. Great book I’m excited for book 2.”

The Great Game of Business