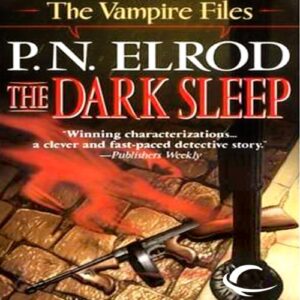 The novel that vampire fans have been thirsting for…the newest addition to P.N. Elrod’s popular series The Vampire Files. Called “fast…intriguing,” by Science Fiction Review, and “good-natured fun” by Locus, P.N. Elrod’s series The Vampire Files has captured the imaginations of vampire fans and mystery readers alike. Jack Fleming, a vampire detective, makes his “living” on the mean streets of post-prohibition Chicago. As he struggles to fight the gangsters at large, he is also trying to sustain an ordinary life. At least, as ordinary as it can get when you’re a vampire… Death hasn’t ended Jack Fleming’s problems. His girlfriend, Bobbi, has caught the attention of a famous radio star, who promises to open doors for the lovely singer – including the one to his bedroom. His current case-retrieving incriminating letters from the ex-lover of a rich, foolish young socialite looks simple until bullets start flying. Now Jack’s mortal partner is in the hospital. Who’s behind the gun? The ex-lover? The radio star’s goons? An old enemy? Jack has to find out the truth-before the lives of those he loves are put at risk…

Why We Can’t Sleep