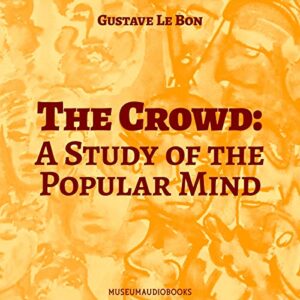 The Crowd: A Study of the Popular Mind is a seminal work on crowd psychology by Gustave Le Bon (1841-1931), a French social psychologist. He observes that a crowd forms when an influential idea unites a number of individuals and prompts them to act towards a common goal. In a crowd, the conscious personality of the individual is submerged and dominated by the collective mind. Furthermore, every sentiment becomes contagious to a degree that individuals readily sacrifice their personal interest to the collective. Le Bon discusses the general characteristics, ideas, reasoning power, imagination, morality and mental unity of the crowd, including the behavior of criminal juries and parliamentary assemblies. Crowds often act in an immoral manner because mankind’s primitive instincts that lie dormant in the isolated individual, are unleashed by the dynamics of the crowd. Le Bon’s fascinating work also examines the ways in which a nation’s generally accepted beliefs influence the processes of history.

Jesus Christ and the Life of the Mind