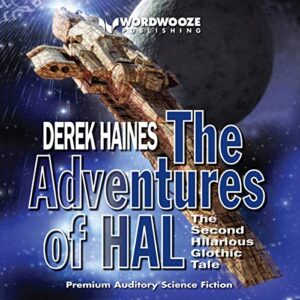 Millions of years before February the Fifth, Gloth was making a nice little profit from the planet Erde, with the help of some cunning popes and the very, very secret Camera Stellata, sometimes better known as the Star Chamber.

Being disowned by his father and booted out of his family manor in England and then transported off to the distant sun-drenched shores of Australia didn’t sound like such a bad punishment for Hal, all things considered. Sydney, however, didn’t prove to be his cup of tea, but a quick move to Brisbane leads Hal to a wonderful new life full of friends, backyards, barbecues, beer, surfing, The Breakfast Creek Hotel, and Narelle.

For a short time, unfortunately, as so often happens, just when you think things are beautifully perfect, someone or something comes along to throw a spanner in the works. In Hal’s case, his idyllic life gets hit by a number of airborne wrenches. Then, when he thinks things are about as bad as they can get, they of course get a whole lot worse.

Afflicted by an allergic reaction to dust and scary things, Hal does a lot of sneezing as he goes about trying to make the whole lot worse a whole lot better.

Hear The Adventures of Hal, a laugh-a-minute romp around the galaxy.

Adventures Beyond the Body