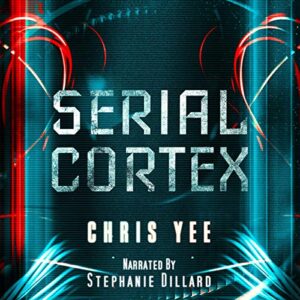 Breaking into a murderer’s mind is dangerous. Making it out alive could be impossible.

Hanna Li is on the brink of a scientific breakthrough. With her pioneering tech that allows anyone to travel into another human’s mind, she’s found the perfect therapy for overcoming irrational fears. But with funds drying up, she reluctantly accepts a risky but lucrative bid to hijack a ruthless killer’s psyche.

Partnering up with detectives from the Serial Crimes Bureau, Hanna infiltrates the mind of the prime suspect in a triple homicide. But what she uncovers is shockingly more disturbing than the memories of a psychopath….

Can Hanna crack the consciousness of a deranged criminal before she becomes the next victim?

Serial Cortex is a mesmerizing science fiction crime thriller. If you like brain-bending technology, fast-paced suspense, and glimpses into a dark future, then you’ll love Chris Yee’s action-packed novel.

Download and listen Serial Cortex to enter the mind of a murderer today!

Closer Than She Knows