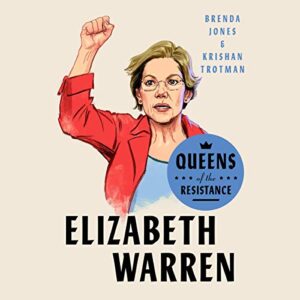 Part of the four-book Queens of the Resistance series, saluting some of the most beloved boss ladies in Congress: a celebration of Elizabeth Warren, the star senator from Massachusetts

All hail Queen Elizabeth! She’s a “queen” but not a monarch who’s spent her life fighting to create a more equal society. Now one of the most recognizable women in politics, Warren took a winding road to become the badass senator from Massachusetts – the first woman senator ever elected from the state. Day-to-day struggle to make ends meet? Check. Single motherhood? Check. Law degree? Check. Tenured Harvard Law professor? You bet! And oh, she created a whole new government agency to protect consumers from predatory businesses. This the story of Liz’s hard-earned rise to the top of the game.

With deep research and writing as endlessly quotable as she is, Queens of the Resistance pays tribute to this phenomenal woman.

About the series: Each book of the Queens of the Resistance series is a celebration of the rebellion against the oppression of women and an embracement of the new in the United States government. The series is adorned with sass, discernment, and the badassery of the present and future leadership.

The Doomsday Clock is at a minute to midnight, and the patriarchal power grid that lights “the shining city on a Hill” is about to black out. It’s time to yield to the alternative – the power of women.