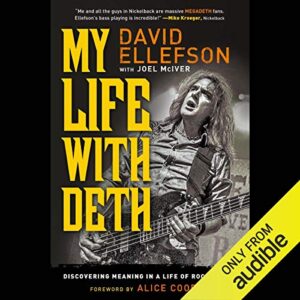 In My Life with Deth, cofounder and bassist of Megadeth David Ellefson reveals the behind-the-scenes details of life in one of the world’s most popular heavy metal bands. If you’re looking for revelations, they’re here, including the drug habits that brought the band members to their knees. You’ll learn of David’s unsuccessful attempts at rehab and the period when he was strung out on methadone, cocaine, and heroin – all at the same time.

But My Life with Deth is far more than just another memoir of debauchery. Ellefson also shares the story of his faith journey, which began when he decided his only choice for survival was to get free from his addiction. In his recovery, he returned to his childhood roots in the Lutheran church and embraced his Christianity, which continues to inform his life and work today.

In the pages of this book, you’ll find insightful comments from some of the biggest names in heavy metal, along with life lessons for every listener. Whether religious or not, you’ll be enthralled, informed, and inspired by this tell-all book on discovering meaning in a life of rock and roll.

The Triumph of Christianity