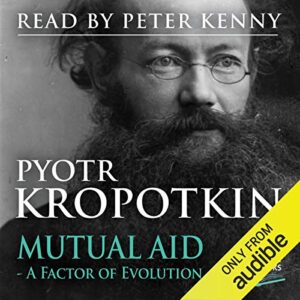 Pyotr Kropotkin (1842-1921), one of the most individual political figures of his time, is best known as an influential anarchist communist. But he was also a scientist, geographer and philosopher, a man who, having grown up on his aristocratic father’s extensive country estate in Russia, had a deep understanding of and love for animals (wild and domesticated), the countryside and wildernesses. And all this was underpinned by a life committed to work for the good of humanity.

Though his two best-known works, The Conquest of Bread and Fields, Factories and Workshops, are revolutionary economic texts, Mutual Aid, a collection of essays published in 1902, is a jewel of another kind. In it, Kropotkin argues that Darwin’s views on evolution and the survival of the fittest show only one aspect of life on planet Earth. Taking a kindlier – but equally scientific – look at the existence and growth of societies, both animal and human, Kropotkin takes great pains to demonstrate that the principal of mutual aid is just as important a feature in life on Earth – in fact, even more important.

In this most engaging, absorbing and even endearing book, Kropotkin shows that societies evolve and develop better though the principle of mutual aid than by challenge, conflict and conquest. His chapter headings provide the overview: ‘Mutual Aid Among Animals’, ‘Among Savages’, ‘Among the Barbarians’, ‘In the Medieval City’, and ‘Amongst Ourselves’. His positive and uplifting conclusion is clear: ‘In the practice of mutual aid, which we can retrace to the earliest beginnings of man, mutual support – not mutual struggle – has had the leading part. In its wide extension, even at the present time, we also see the best guarantee of a still loftier evolution of our race.’

This humane attitude was the driver behind his politics, because Kropotkin the scientist was also very much a political personality. But Mutual Aid is endlessly entertaining and informative because it contains thousands of well-documented examples of his thesis, whether drawn from colonies of ants and bees, or ‘mutual protection among small birds; or rodents and ruminants; Bushmen, Eskimos, Caucasian mountaineers; village life in Switzerland, Germany; or from the history of Guilds and trade unions.’ Mutual Aid – A Factor of Evolution is a classic that should be far more widely known and appreciated.

Mutual Aid: A Factor in Evolution