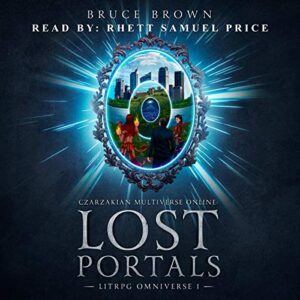 This litRPG, Lost Portals, is like if they installed Star Gate in the Matrix except the Matrix is a multiverse explored by the Federation using portals.

Seven Game Master Corpsmen are in a coma after trying to explore an anomalous glitch in humanities multiverse simulation, the Czarzakian Multiverse Online. The GMC has classified the danger associated with the anomaly. They call the phenomenon a “lost portal”.

Newly commissioned Game Master, Priest McKenna, makes the mistake of leading his team into a lost portal. Priest and his wife are the only two corpsmen to return from the lost portal and not go into a coma but the event changed their lives forever. They lost their team, their memories of what happened inside the portal, and they lost their marriage.

Priest also loses his class and powers and the Game Master Corps questions his ability as a leader. His ex-wife becomes a dangerous rival.

Now Priest must create a new team of multiverse explorers to get his powers back and find the lost portal where his friends are still trapped. He recruits a timid portal mage, an intern developer, and others. The only way to get what they want is to level up and journey deeper into the multiverse.

Can the team grow in skill and ability to even survive exploration of the multiverse? Can they find the lost portal and save the team stuck inside? What is the source of these anomalous portals with no destination?