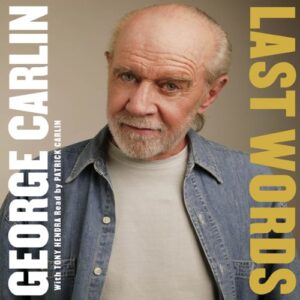 As one of America’s preeminent comedic voices, George Carlin saw it all throughout his extraordinary 50-year career and made fun of most of it. Last Words is the story of the man behind some of the most seminal comedy of the last half century, blending his signature acerbic humor with never-before-told stories from his own life.

In 1993 George Carlin asked his friend and best-selling author Tony Hendra to help him write his autobiography. For almost 15 years, in scores of conversations, many of them recorded, the two discussed Carlin’s life, times, and evolution as a major artist. When Carlin died at age 71 in June 2008 with the book still unpublished, Hendra set out to assemble it as his friend would have wanted. Last Words is the result, the rollicking, wrenching story of Carlin’s life from birth – literally – to his final years, as well as a parting gift of laughter to the world of comedy he helped create.

George Carlin’s journey to stardom began in the rough-and-tumble neighborhood of New York’s Upper West Side in the 1940s, where class and culture wars planted the seeds for some of his best-known material, including the notorious “Seven Words You Can Never Say on Television”.

His early conflicts, his long struggle with substance abuse, his turbulent relationships with his family, and his triumphs over catastrophic setbacks all fueled the unique comedic worldview he brought to the stage. From the heights of stardom to the low points few knew about, Last Words is told with the same razor-sharp honesty that made Carlin one of the best loved comedians in American history.

Words on the Move

Love and Other Words

In the Buddha’s Words

The God of Lost Words