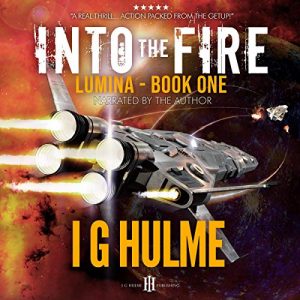 The Earth is about to fall.

But the war has only just begun….

Only the Ghost Runners – a secretive group of maverick pilots operating alone outside of the military – bring hope as war rages across the galaxy.

Humanity looks to the Ghost Runners…but when he thinks they have betrayed him, Ryann strives to find them first to satisfy his own thirst for revenge….

Into the Fire is the first book in the Lumina series, a fast-paced space series that follows Ryann Wade and his partner, Angelique, in their coming of age, just as the colonized galaxy faces the threat of an imminent invasion. Lots of action – dogfights in space – and the beginning of an epic story that spans the galaxy!

For all of you who love Star Wars, Star Trek, Serenity, Starship Troopers – a great sci-fi epic military space-shooter!