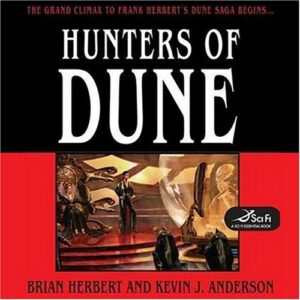 Based directly on Frank Herbert’s final outline, which lay hidden in a safe-deposit box for a decade, Hunters of Dune will finally answer the urgent questions Dune fans have been debating for two decades.

At the end of Frank Herbert’s final novel, Chapterhouse: Dune, a ship carrying a crew of refugees escapes into the uncharted galaxy, fleeing from a terrifying, mysterious Enemy. Hunters of Dune is the exotic odyssey of the crew as it is forced to elude the diabolical traps set by the ferocious, unknown Enemy. To strengthen their forces, the fugitives have used genetic technology to revive key figures from Dune’s past, including Paul Muad’Dib and Lady Jessica, so their special talents will challenge those thrown at them.

Failure is unthinkable. Not only is their survival at stake, but they hold the fate of the entire human race in their hands.