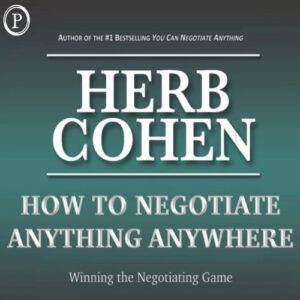 Cohen views the world as huge negotiating table and describes the art of compromise not as a competition but rather as the art of offering choices. His humorous lessons and apt imitations of famous personalities and personal acquaintances are truly hilarious. Listen and you’ll come to view life with a whole new perspective.

Herb Cohen’s You Can Negotiate Anything has sold over 1.4 million copies and spent nine months on the New York Times best seller list. Cohen has been intimately involved with highly publicized negotiating dramas including the Iranian Hostage Crisis, the skyjacking of TWA Flight 847 and the Achille Lauro terrorist incident. Besides serving as an advisor to two US presidents, acting as a consultant to hundreds of corporations, entrepreneurs and governmental agencies, Cohen has aided individuals in their successful attempts to take on and prevail over corporate giants such as General Motors and Metropolitan Life. Now known as “the guy the pros go to” for help in negotiating crisis, business, and other important strategy.

Rich Dad’s Who Took My Money?