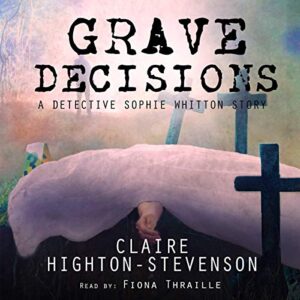 Do you believe in fate? That Karma will even things out?

Anita Simmons didn’t, and now she must pay for her crime with her life.

Detective Inspector Sophie Whitton had hoped for something simple to ease herself back into the job following the Doll Maker case. She should have known it would never be that easy.

It’s hot, summer has arrived with a wave of heat that has the town of Woodington steaming, a powder keg waiting to explode. When Anita Simmons’ body is found on top of a grave, Whitton and Saint are perplexed as to why anyone would want to kill this woman. She’s a married mum of two who spends her life helping others. What could she have done to deserve this?

While working hard to catch the killer, Whitton is also working to fix herself. PTSD has taken its toll after the Doll Maker and she’s having flashbacks, imagining her lover Rachel at every scene. Now she’s seeing Dr Westbrook to work through her issues, but will it be enough to keep her relationship intact?

As the team delves deeper, they uncover a lot more than they anticipated. And when more grave murders are discovered across the country, Whitton realises that this isn’t an ordinary killer they’re chasing. It’s a vigilante set on restoring his own form of justice, acting as judge, jury, and executioner.

Every Sky a Grave